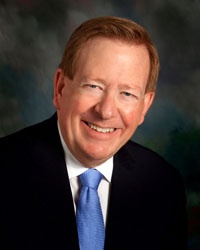 Mayor Jim Brainard is Carmel’s first six-term mayor. During his terms in office, Carmel has grown in population from 25,000 to almost 100,000. Parkland, greenspace and trails have increased. The development of an Arts & Design District, a downtown called City Center and a new Midtown project joining the two together, has helped in the creation of a vibrant, thriving walkable city where companies want to locate, where employees want to live and where families want to raise their children. Mayor Brainard is frequently asked to speak around the world about city planning, climate change, redevelopment and roadway networks.

Mayor Brainard spearheaded the redevelopment in the Old Town area of Carmel into an Arts & Design District, which has transformed a much neglected original center of town into a thriving district with galleries, restaurants, shops and community events attracting thousands of visitors each year as well as the attention of the national and international media.

As part of the City Center project to create a downtown for Carmel, Mayor Brainard incorporated world-class cultural and entertainment venues. The Center for the Performing Arts in City Center includes the Palladium, a state-of-the-art, 1,600-seat concert hall, The Tarkington, a 500-seat proscenium theater and the 200-seat Studio Theater. Mayor Brainard was also successful in gaining the talent of Michael Feinstein as the Artistic Director for the Center as well as integrating the Great American Songbook Foundation and Songbook Academy into the cultural options at the Center. All of these venues, including an outdoor amphitheater named Rotary Centennial Plaza, opened in 2011.

Mayor Brainard has encouraged the construction of roundabouts, which reduced accidents with injury almost 80 percent at intersections when contrasted to signalized intersections. The City now has more than 100 roundabout intersections, the most of any other city in the United States.
Carmel has been honored with many awards for its high quality of life and environmental initiatives. Carmel is among Money magazine’s Best Places to Live in America - #3 in 2014 and #1 in 2012 for cities with a population of 50,000 – 300,000. In 2015, Carmel was recognized as Community of the Year by the Indiana Chamber of Commerce. The City was awarded first place in the Climate Protection Awards from the U.S. Conference of Mayors for its roundabout program and national runner-up of the Home Depot Awards of Excellence in Community Trees. Carmel has also been the recipient of the Sterling Tree City Award, honorable mention for Municipal Excellence from the National League of Cities and has been designated a bronze level Bicycle Friendly Community by the League of American Bicyclists.
Based on surveys using community statistics, Carmel is consistently ranked among the top places to live for families, singles, children, senior citizens and veterans based on low crime rates, low cost of living, excellent schools, availability of high paying jobs and appreciation of community amenities such as arts, culture, parks and recreational opportunities.
Mayor Brainard’s academic background includes a Bachelor of Arts in History from Butler University and Doctor of Jurisprudence from Ohio Northern University.  He also received a diploma from the Oxford Institute on International and Comparative Law from the University of San Diego. His book, entitled Carmel, ‘round about right, shares the story of redevelopment in Carmel during his administration.

Mayor Brainard is serving as a Trustee and Co-chair of the Energy Independence and Climate Protection Task Force for the U.S. Conference of Mayors. In November of 2013, he was appointed to the Task Force on Climate Preparedness and Resilience by President Barack Obama.  In 2015, he traveled to four cities in India to represent the United States as part of the U.S. State Department’s speaker’s bureau.   Also, in 2015 he was asked to speak on energy and climate policy at the German-American Centers in five German cities.  In 2016, he was asked to speak on climate change and urban design in Rome, Italy at the International Making Cities Livable Conference.  Additionally, he has been a guest lecturer for Georgetown University, Butler University, Indiana University and Purdue University among others.  He often speaks to city councils and planning commissions across the United States about city design and development.

The Mayor has served as President of the Butler University Alumni Association, was included in Butler’s “50 Under 50” in 2004 and has served as a Trustee of the university. He taught as an adjunct instructor at the University of Indianapolis and was named one of the “Most Powerful Hoosiers in the World” by Indianapolis Monthly.  He is a member of St. Elizabeth Seton Catholic Church and the Rotary Club of Carmel. He resides in Carmel and has four children: Jack, a physician; Will, an attorney; Marie, an occupational therapist and Martha who is attending Colby College in Maine.


Back to the Mayor's homepage