A City to Experience

Carmel on the Map
Find your way to Carmel City Hall

Carmel, Indiana is a fast-growing, economically-thriving suburban edge city on the North Side of Indianapolis. Home to about 91,065 residents (2016 U.S. Census Bureau), the once sleepy suburban community has been transformed over the past 20 years by ambitious redevelopment projects that have led to the making of a vibrant city that is no longer simply a place to sleep at night.

The City of Carmel spans 47 square miles across Clay Township in Hamilton County. The City is bordered by the White River to the east; Michigan Road (U.S. 421) and the county line to the west; 96th Street to the south and 146th Street to the north. Known for its highly educated and affluent population, Carmel households have average median income levels of $106,444 and the median average price of a home is $304,400, according to the U.S. Census Bureau.

With excellent schools, low taxes, safe neighborhoods and ease of transportation, Carmel has emerged as one of the most coveted places to live, not just in Indiana, but in the United States. In 2012, CNN Money Magazine named Carmel the #1 place to live in America (for cities ranging from 50,000 to 300,000 in population.

From border to border, Carmel is known for its distinct residential neighborhoods, rich in architectural diversity, including many beautiful estates that have attracted many of Indiana’s noteworthy citizens, including the owners of professional sports franchises, corporate CEO’s, professional athletes and at one point the Vice President of the United States.

In addition, a progressive city government has adopted a new-urbanism approach to planning, welcoming in certain city areas a high-density approach to development. This has attracted a growing number of apartments and condominium developments designed to cater to a younger population just starting out in their careers and a place for our seasoned citizens who are seeking empty-nester living. Such developments are also benefitting from the City’s approach to walkability, where a system of trails and bike-lanes have made Carmel one of the most bike-friendly communities in Indiana. Many residents can live, work, shop and enjoy entertainment without using their cars.


We continue to build strong ties locally, nationally and internationally through involvement in organizations such as:

This is the official flag of the City of Carmel, which was created in 1976 to commemorate the fact that Carmel was now officially a city, not a town.

The City of Carmel has been recognized with numerous awards and ratings for its programs and services.
Click here for the most up to date list. 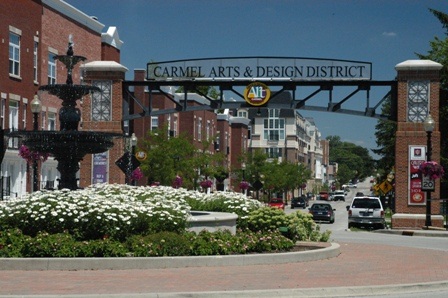