The Operations Division is the largest and most visible arm of the Police Department. The men and women of the Operations Division are seen daily behind the wheel of a marked police car responding to calls for assistance from the public, investigating traffic accidents, finding lost children and maintaining order and peace within the community.

They are the backbone of the Department and are our "front-line ambassadors" to the community. In large part, the quality of life in Carmel can be attributed to the commitment of these officers. The Operations Division provides 24hr coverage, 365 days per year (including holidays) to ensure that the citizens of Carmel can live and work in a safe, secure and peaceful community. 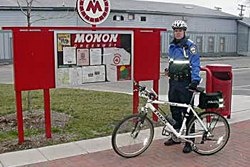 Responsibilities of the Operations Division include responding to emergency and non-emergency calls for service, arresting offenders, conducting initial investigations and evidence gathering, investigating traffic crashes, maintaining proper traffic control and flow throughout the city and enforcing traffic laws and ordinances to encourage voluntary compliance with existing traffic laws and ordinances. During 2009, Carmel Officers responded to 66,763 calls for service, investigated 1,754 reportable traffic crashes, issued over 10,000 traffic citations and over 27,000 warnings.

The Division is also responsible for the following specialized units: